A prior use as prima facie evidence in a plea of nullity is frequently cumbersome — and was unsuccessful here. The prior use had allegedly occured already more than 10 years ago. The defendant did not provide a binding cease and desist declaration; preliminary injunctive relief was granted. It was not even made conditional on the payment of a security by the plaintiff since the defendant had repeatedly argued that the allegedly infringing machines were no longer marketed anyhow. Thus, the FPC did not anticipate that the measures may cause loss or damage to the defendant (Art. 264 CPC).

Milk frothers are frequently litigated in Switzerland. You might perhaps recall the decisions “Milchschäumer“ and “Milchschäumer II“ a few years ago. The present case is apparently not related to the old ones, but again pertains to a milk frother. Fortunately, catchwords are not confusingly similar: This time, it’s a milk frother for cold milk (Kaltmilchschäumer).

i) BACKGROUND OF THE CASE

One of the plaintiffs is the patentee of both patents in suit, i.e. a Swiss patent and a European patent. The other plaintiff is a member of the same group of companies. However, the parties are anonymized in the decision.

Nevertheless, from the wording of the requests and the technical details given in the decision, it is evident that CH 707 091 B1 and EP 2 120 656 B1 are the patents in suit. The patentee is Steiner AG Weggis. A connected undertaking of Steiner AG Weggis is Thermoplan AG — quite likely the second plaintiff. Never heard? Thermoplan manufactures the machines that Bloomberg recently referred to as “Starbucks’ secret weapon“.

Opposition/appeal proceedings are currently pending against EP 2 120 656 B1. The online file wrapper at the EPO is insightful: Franke Coffee Systems GmbH of Germany intervened as a party (under Art. 105 EPC), since proceedings for infringement of that patent had been instituted against them. In the intervention, it is referred to two summary proceedings at the regional court of Düsseldorf (Germany), i.e. 4a O 52/14 and 4a O 81/14 (the fulltext of the intervention is available here). No further details on these proceedings are available to date, but the present decision of the FPC also refers to two “corresponding decisions in summary proceedings” at the regional court of Düsseldorf on the German part the patent in suit. There are some further hints in the decision; in sum, it is abundantly clear to me that Franke Coffee Systems is involved as the defendant (i.e. the Swiss member of the Franke group of companies, Franke Kaffeemaschinen AG).

The European patent was maintained in slightly amended form by an Opposition Division (OD) of the EPO; see the Druckexemplar of the interlocutory decision of the OD. Appeal proceedings are still pending. The independent claims as maintained by the OD read as follows (markup vis-à-vis EP 2 120 656 B1 as granted:

1. A method for the production of milk foam or milk-based drinks, wherein milk is sucked with a pump (1) out of a container (3, 3′) and conveyed to an outlet (11′), air or a gas being added to the milk, whereby the milk/air mixture is processed in a cold state into milk foam and conveyed as cold or hot milk foam to the outlet (11′), characterised in that
the milk or the milk/air mixture, which is sucked by the pump (1) und mixed with the air respectively the gas, is selectively conveyed via a throttle point (12) directly or via a flow heater (16) to the outlet (11′).

ii) WORDING OF THE REQUESTS

The proper wording of requests for injunctive relief is a matter of ongoing discussion amongst practitioners. Swiss case law strictly follows the rule that a request must be precise enough to allow enforcement of the prohibition by mere factual inspection; see e.g. this Blog here (with further reference). The present request for preliminary injunctive relief is quite lengthy. But it is a good example of a request that makes use of photographic illustrations of the infringing features to meet this goal (in German language, but you will get the idea):

Moreover, the request did not reach beyond the scope of the patents. Consequently, the FPC held that the wording of the requests was formally allowable.

Construction of the term “throttle point (12)” was under dispute. Clearly, this throttle point converts the milk/air mixture to a milk foam. In a function-oriented construction of the term, the FPC first clarified the terms “milk/air mixture” and “milk foam”. There is neither a precise definition in the patents nor have the parties provided any commonly accepted definition. A Ph.D. thesis of Katja BORCHERDING was not held sufficient since it only relied on a single reference for an amount of 0.5-0.97 vol.% of air in a milk foam. The term “milk/air mixture” was thus construed very broadly as “any mixture of air and milk”, thus also encompassing “milk foam”.

As to the contribution of the throttle point, the FPC held that this is any kind of bottleneck that at least contributes to the formation of a milk foam.

The defendant argued that the allegedly infringing machine had only been produced and sold from January 2013 to February 2014. It had then been replaced by a new machine with a different (allegedly non-infringing) milk frother. However, the defendant did not provide any arguments as to why the contested embodiment would not infringe the patents in suit. The FPC considered the legitimate interest of the plaintiff ex officio (Art. 59 CPC). A danger of repetition of the alleged and undisputed infrigement remained since the defendant did not declare to cease and desist; cf. BGE 124 III 72, r. 2a and BGE 128 III 96, r. 2e. Moreover, validity of the patents was still disputed, and even the allegedly non-infringing machine was illustrated with a diagram that still carried the name of the contested device. In sum, the FPC held that the legitimate interest in preliminary injunctive relief still remained.

A threat of a not easily reparable harm was acknowledged for the reason alone that it would be difficult for the plaintiff to later on prove the causality of the harm to have occured from the infringement. Urgency of the matter was not compromised by the fact that the plaintiff had awaited the outcome of the decision of the OD of the EPO; this was rather appreciated as prudent by the FPC.

v) PRIOR USE: REQUIREMENT OF PRIMA FACIE EVIDENCE

The defendant argued for nullity of the patents in suit. Besides some further prior art documents (see below), nullity was argued in view of a prior use “Esprè Magic”. This prior use had been documented in corresponding opposition proceedings before the EPO with the following documents:

Note that the prior use had occured already more than ten years ago. Two affidavits in support of the prior use and the technical details thereof were put on file by the defendant when the plaintiff had disputed the public availability and the relevant technical details of “Esprè Magic”. These affidavits were not supported with further documentary material. Moreover, the affidavits were not free from inconsistencies. Thus, the FPC was reluctant in considering these declarations. Apparently, the Regional Court of Düsseldorf came to the same conclusion in parallel proceedings in Germany. Moreover, it was not only that the FPC had doubts as to whether a prior use had actually occured or not. Even the technical details of the alleged prior use were held to be not sufficiently clarified by prima facie evidence to be considered novelty-destroying for the patents in suit.

Novelty of claim 1 of CH 707 091 B1 over R4 (i.e. EP 0 485 350 A1) was disputed. The decision highlights two decisive issues: First, the term “throttle point (12)” was construed very broadly (cf. above), and thus the bottleneck in conduit 6 of R4 was identified as to fulfil this feature. Second, it was required that the milk foam be conveyed to the outlet in a cold state. R4 discloses that the conduits 3 and 6 can be held at room temperature, thus with inoperative heating elements 10. Accordingly, the FPC held that a prima facie lack of novelty of claim 1 of CH 707 091 B1 was given.

viii) WHAT’S UP ON THE MARKET

The allegedly infringing machines are not identified in the decision. But in the meantime it has become a rubber-stamping excercise for me to dig a bit deeper into what is actually happening on the market. I have learned from followers of this blog that this is highly appreciated. So, these are the snippets of information that I could gather from the internet:

The world premiere of the Franke FoamMaster™ FM800 (flyer dated 12/12; CH and DE) was in early 2013 in Switzerland (see gourmet 4/13). Consequently, this machine was also promoted on the Franke website back in 2013 as the new premium device:

However, the FM800 is no longer promoted on the Franke Website for Switzerland (see screenshot of August 13, 2014 below). The same holds true for the Website for Germany. No signs of the FM800 machine anymore. Seemingly, the FM800 has been replaced by a machine FM750 (flyer dated 07/14; CH):

Thus, the FM800 would perfectly match the bibliographic criteria of the allegedly infringing machine at stake in the present decision. I have found a detailed technical booklet on the FM800 machine on the internet, with a water flow diagram (Wasserlaufschema) on p. 320: 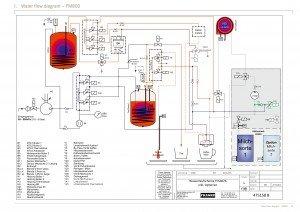 This illustration looks strikingly similar to the one reproduced on p. 6 of the decision, but details are scarcely visible in the decision. Pump P100 and restrictor BL0.8 are referred to in the decision, and are also visible on the right side of the above water flow diagram. In my personal opinion, all these are strong technical indications towards the FM800 machine.

— FULL TEXT OF THE DECISION —

One Reply to “This milk frother won’t leave you cold”