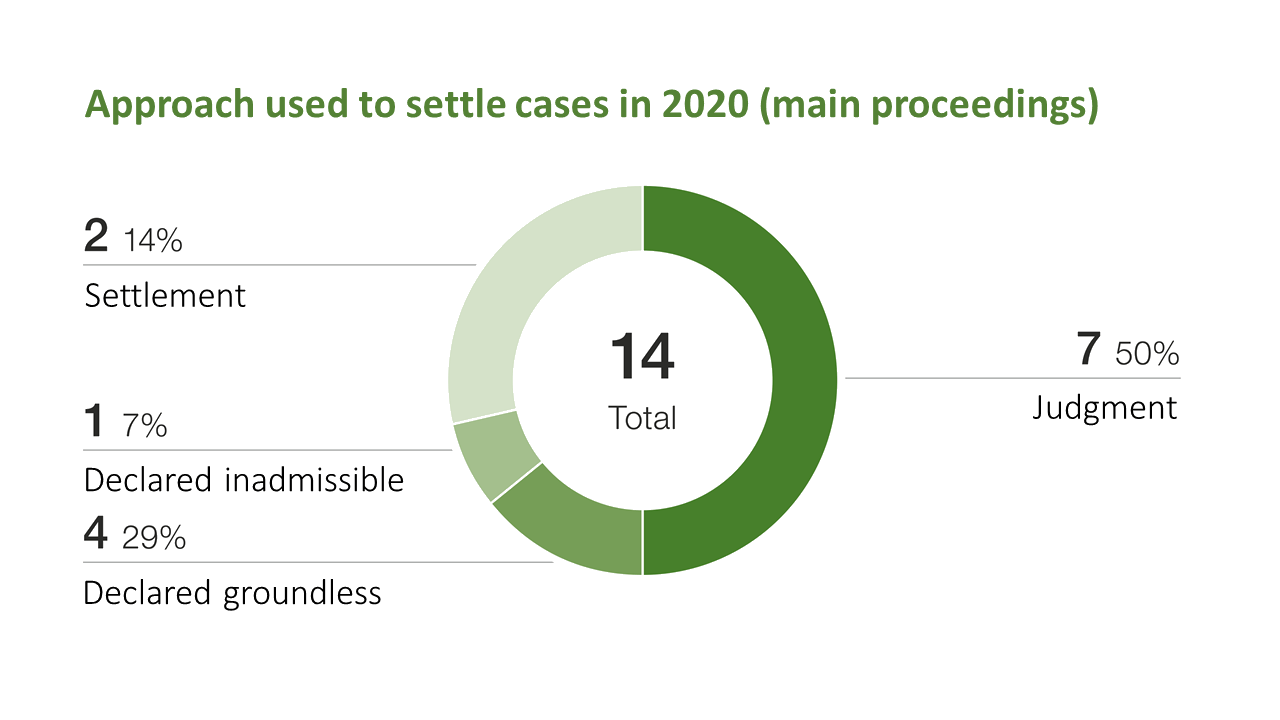 The official Annual Report 2020 of the FPC has been published yesterday. It comes along with an Executive Summary as follows:

During the reporting year, the Federal Patent Court handled 14 ordinary proceedings, of which two were settled and seven terminated by judgment. One set of proceedings was not admitted and four were declared groundless. A total of three summary proceedings were disposed of during the reporting year, of which one was terminated by judgment and two were declared groundless. The number of cases pending by the end of the year increased slightly (25, 21 in the previous year).

A closer look at the numbers

The overall number of incoming cases is slightly on the rise again, after two years of decline:

The overall number of concluded cases fell sharply from an all-time high in 2019 to an all-time low in 2020:


The backlog increased slightly, from an all-time low (20 cases) in 2019 to 25 cases (24/1 main/summary proceedings), which still is the second lowest backlog:


«What had been the rule in the early years of the FPC (and a selling point, so to speak) has meanwhile become the exception: A settlement by compromise.» This is what I wrote already last year. And the trend is continuing: Only about 14% of the main proceedings were disposed of by compromise, and not a single case in summary proceedings. This is an all-time low, by far.


Which is good for me: A non-settled case will be published and can be commented here … 😉

German is still by far the most frequently used language at the FPC. All(!) main proceedings filed with the FPC in 2020 were handled in German, even though the parties agreed in two of them to use English in their written submissions and pleadings.

The pandemic did not significantly impair the FPC’s proceedings. No hearings were held during the first lockdown in spring 2020, and in-person hearings have since resumed with protective measures in place (social distancing, face masks and spex screens).

As to instruction hearings, the FPC rejected requests to broadcast them by videoconference for participants to join who could not attend in person due to travel restrictions. The FPC held that the confidential nature of the settlement discussions do not allow for videoconferencing.

Finally, the FPC notes that the cooperation with the FAC went very smoothly on operative levels. However, the FPC also notes that it requested to be involved early on in projects of the FAC that directly affect the FPC. It is specifically referred to the equipment of the courtrooms (which in fact are mainly used by the FPC) and the business administration software.

This is a pretty lengthy note in the Annual Report. I wonder whether this is only an advance notice / wish of the FPC to be involved, or whether something already did not work out to the FPC’s satisfaction.

The Annual Report is also available in German, French and Italian language.