An invention cannot be patented according to Art. 52(1) EPC if it

Easy, isn’t it? Not so, the closer you look.

In legal terms, the ‘state of the art’ is defined in Art. 54(2) EPC which reads as follows in the three official languages of the EPC (emphasis added):

There are at least two issues that have recently been looked at more closely in relation to the term ‘state of the art’ in Switzerland:

The Swiss Supreme Court recently held that even a non-enabling disclosure well belongs to the ‘state of the art’ (contrary to what the EPO typically does, i.e. to just ignore it; see Guidelines, G-IV, 2). But, in the Supreme Court’s view, such a piece of prior art cannot be assessed with the EPO’s problem-and-solution approach because the objective technical problem in such a case is just to find a working solution for what had been insufficiently disclosed previously, and there is an inherent motivation to search for that solution; see this Blog here.

At the INGRES annual meeting of July 5, 2018, Hannes Spillmann briefly discussed a clash between two Board of Appeal decisions at the EPO, i.e. T 0172/03 and T 2101/12. The latter explicitly disagrees in its headnote with the headnote of the earlier decision T 0172/03, in the fundamental question of what actually is meant with

state of the art.

Which ‘art’ does Art. 54(2) EPC refer to? Can something described previously be excluded right from the outset just because it is not related to classic ‘technology’? The headnotes of T 0172/03 suggest exactly that (emphasis added):

1.   The term ‘state of the art’ in Article 54 EPC should, in compliance with the French and German text, be understood as ‘state of technology’, which in the context of the EPC does not include the state of the art in commerce and business methods. The term ‘everything’ in Article 54(2) EPC is to be understood as concerning such kind of information which is relevant to some field of technology.

2.   From these considerations it follows that anything which is not related to any technological field or field from which, because of its informational character, a skilled person would expect to derive any technically relevant information, does not belong to the state of the art to be considered in the context of Articles 54 and 56, even if it had been made available to the general public before the relevant priority date (see points 8 to 10 of the reasons).

Points 8 to 10 of T 0172/03 referred to in hn 2 leave no doubt that the gist really is to just exclude certain publications from any consideration as ‘state of the art’ whatsoever:

[T]he decision under appeal […] identifies the closest prior art as “the existing order placing mechanism” as if such a business scheme qualified as prior art as any other piece of technical information. […]

It can hardly be assumed that the EPC envisaged the notional person skilled in the (technological) art to take notice of everything, in all fields of human culture and regardless of its informational character. A consistent construction of the patentability provisions requires the term “everything” in Article 54(2) to be understood as concerning such kind of information which is relevant to some field of technology.

Article 54(2) EPC does not exclude non-technical disclosures from the prior art, in disagreement with Catchword 2 of T 172/03.

I fully concur with this. Whatever has been made available to the public is to be considered ‘state of the art’ in the sense of Art. 54(2) EPC, irrespective of whether it relates to a field of ‘technology’ or not.

The ‘state of the art’ for the purposes of considering inventive step is as defined in Art. 54(2) (see G‑IV, 1). It is to be understood as concerning such kind of information as is relevant to some field of technology (see T 172/03).

It is not that I have an issue with this quote. Even a non-technological ‘state of the art’ may well be relevant to some field of technology, e.g. when a mere business method as ‘state of the art’ is automated, and it is patentable when this is achieved in a new and non-obvious manner. This is how T 2101/12 approached it. But this understanding clearly is not what T 0172/03 advocated for. Incomplete reference to only part of hn 1 of T 0172/03 is misleading, at best. In my opinion, reference to T 0172/03 should be deleted from the Guidelines completely.

The following is just to name a few examples of state of the ‘art’ not taken from what one would typically consider a ‘field of technology’. Have fun.

I once had a hard time to properly communicate to a client that a U.S. examiner held SpongeBob to anticipate his invention:

The examiner referred to the following screenshot:

See the tool in motion here, if this meets your sense of humor; the screenshot was taken at approx. 1:04 min.

I do not think the examiner did a bad job. In fact, the MPEP 2125 (‘Drawings as Prior Art’) fully supports this approach:

Drawings and pictures can anticipate claims if they clearly show the structure which is claimed. […] The origin of the drawing is immaterial. The drawings must be evaluated for what they reasonably disclose and suggest to one of ordinary skill in the art.

On his fourth mission ‘Thunderball‘, James Bond aimed to recover two stolen warheads. They had been taken by the evil SPECTRE organization. The world was held hostage and Bond headed to Nassau where he was forced into a thrilling confrontation with SPECTRE agent Emilio Largo, on board and around his boat, the Disco Volante. Bond used a special breathing apparatus:

This scene was cited as ‘state of the art’ in GB 2 273 053 A; see ‘Documents cited’ on the title page. Indeed, figure 1 of GB’053 shows a stylized special agent with a somewhat similar breathing apparatus:

If I had prosecuted the following claim (US 10/212,636, claim 2 as filed), I surely had not expected to become best buddies with the examiner: 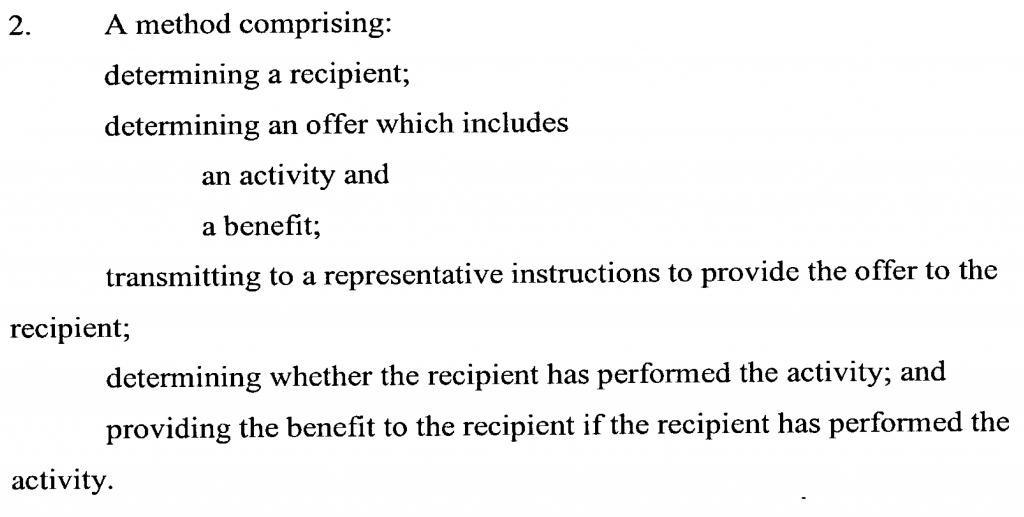 But being faced with the Holy Bible as ‘state of the art’ might make one’s blood run cold in one’s veins! The rejection read as follows:

[…] In Genesis, Chapter 41, we are told that Pharaoh appointed Joseph to be his representative and instructed him to enter into contracts to purchase grain. These contracts included an offer with an activity (supply grain) and a benefit (get paid for the grain). Payment was made upon delivery of the grain. The story of Joseph is about 4,500 years old. Neither Joseph nor Pharaoh were considered innovators – the principal / agent relationship is of immemorial antiquity. It no doubt predates civilization itself. The purpose of rejecting this claim using the Bible as reference is to illustrate how ancient the claimed subject matter is. Many of Applicant’s claims could also be rejected using the same reference.

The applicant took up the fight, and his response really is a good read:


On a sidenote, I have once been told (but did not manage to independently verify) that a patent application pertaining to a voice-controlled automated lighting system had been challenged at the EPO with reference to the Holy Bible, too. More particularly, with reference to Genesis, Chapter 1:

And God said, ‘Let there be light’, and there was light.

Misfortunes never come singly: The claim recited above in (4) had also been rejected in view of the law of agency. The apparently highly motivated examiner held:

Basic agency law teaches that a principal may conduct any business through an agent (representative) that he could conduct in person. This includes entering into contracts. To enter into a contract, one determines a recipient (the other party) and an offer, which includes an activity (e.g., paint my house) and a benefit (consideration). If using an agent, the principal transmits instructions to the agent to provide the offer to the recipient. In any contract, there is the step of determining whether the recipient has performed the activity and providing the benefit to the recipient if the recipient has performed the activity.

In a 1949 Walt Disney comic, a sunken ship had been raised by Donald Duck and his nephews. They pushed ping pong balls into it to lift it up:

A similar technology has actually been used later, for the first time in 1964 when Karl Kroyer lifted a sunken ship with 6’000 sheep right in front of Kuwait’s major fresh water intake in the harbor.

Rumor has it that Kroyer’s patent application was rejected in view of the comic strip (as reported e.g. in the newspaper scan above), allegedly by the Dutch patent office — but I could not find any proof for this. Patents have been granted elsewhere (e.g. in Germany and the U.S.).

Nevertheless, I have no doubt at all that this comic strip would have had to be considered as ‘state of the art’ in the assessment of patentability of Kroyer’s invention.