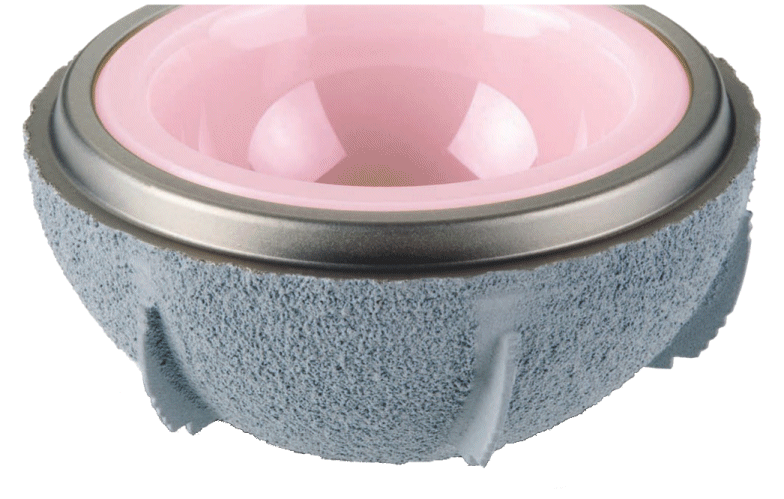 The patent in suit is EP 1 411 869 B1; see Swissreg and EPO Register for further information. Stemcup alleges that Implantec‘s ANA.NOVA® hybrid socket infringes the patent (either literally or under the DoE):

Defendant (1) is the Austrian manufacturing company of the allegedly infringing ANA.NOVA® hybrid socket, which defendant (2) is then placing on the Swiss market.

The relevant claim 2 of EP’869 as initially granted reads as follows:

A socket (1) for an artificial hip joint with a base body or a shell (10) which comprises an in particular spherical, ellipsoidal or conical superficies (11) essentially rotationally symmetrical to the socket axis (AP), characterised in that on the outer side of the base body (10) there are arranged at least two locking elements (20) which in each case comprise a knock-in web (21) which from the distal web beginning up to the proximal web end defines at least a gradient of 85° to 60° with respect to the base surface (GP), which corresponds to an angle of twist of 5° to 30°.

To get a better idea of what is meant by ‘knock-in web (21)’ (or ‘Einschlagsteg’ in German), please see the winglets on the outer shell of the allegedly infringing product on the right.

According to the patent, the locking elements can twist the cup by a few degrees when the implant is driven in. In the plaintiff’s view, this is decisive for the patent in suit. Defendants contest the infringement and argue for invalidity as a plea in defense.

This case surfaced for the first time back in March 2017; see this Blog here. But one got no idea of the subject-matter at stake since that order only related to a procedural issue. The main hearing had been announced for 3 October 2018 for the first time, but it was cancelled. The silence was deafening since then. Finally, the main hearing took place on 29 May 2019, as announced.

It is rare that a presiding judge at the FPC opens the main hearing with a remark that the case is somewhat special. But this case is indeed a bit out of the ordinary. In my understanding of the pleadings, the expert opinion of the judge-rapporteur had been quite positive for the plaintiff re infringement and validity — except for an undue extension of subject-matter in claim 2 as asserted.

Now, what to do after the formal closure of the file?

The plaintiff partially renounced EP’869 at the IPI, to overcome the objection. The partial renouncement has been published on 15 August 2018.

A socket (1) for an artificial hip joint with a base body or a shell (10) which comprises an in particular spherical, ellipsoidal or conical superficies (11) essentially rotationally symmetrical to the socket axis (AP), characterised in that on the outer side of the base body (10) there are arranged at least two locking elements (20) which in each case comprise a knock-in web (21) which from the distal web beginning up to the proximal web end defines a continuous, linear gradient of 85° to 60° with respect to the base surface (GP), which corresponds to an angle of twist of 5° to 30°.

A first version of this post erroneously mentioned that only ‘at least’ had been deleted. This has been corrected in the above.

What had been uncomplicated on the merits at the IPI caused a lot of trouble in the pending proceedings at the FPC: The panel of judges had been enlarged to five judges, with the clear intention to render a decision on all aspects of the case. Consequently, the judge-rapporteur gave a second, updated expert opinion which, in my understanding, was again very positive for the plaintiff’s position re infringement and validity, but did not expand any further on the tricky issue of admissibility of the partial renouncement.

Noteworthy, the plaintiff’s statement of claim had not been changed. It was not in dispute between the parties that it was not a question of an amendment to the statement of claim; Art. 227 CPC. It’s all about whether or not the partial renouncement of the patent at this stage of the proceedings was admissible as a proper novum or improper novum, according to Art. 229 CPC.

The plaintiff holds that the partial renouncement is a proper novum that has been timely introduced into the proceedings, i.e. immediately upon registration with the IPI.

On the other hand, defendants essentially argue that a new fact created by the plaintiff’s own volition and at a time / to an extent of his own choice cannot be considered a proper novum, and that the plaintiff acted much too late in any event: The request for partial renouncement had been filed only about nine months after the defendants had raised the issue of an undue extension of subject-matter with their rejoinder. Defendants requested that the case be dismissed as groundless since the patent in suit does not exist anymore in the form as it once had been asserted.

Some further procedural issues arose with respect to admissibility of certain elements of defendants’ comments on the second expert opinion of the judge-rapporteur. Plaintiff requested in the hearing that it should be decided on this issue beforehand, for him to be in a position to comment the remainder, if any. This request was denied.

Further, defendants had prepared a slide deck to illustrate certain aspects of their pleading concerning the alleged infringement (presumably some tricky geometric concepts of how to properly measure a gradient, according to the patent in suit), and printouts of this slide deck had been handed over to the plaintiff and the judges before a break. Finally, however, the slide deck had not been used at all: The presiding judge returned the handouts to defendants’ counsel after the break and noted that the court will not expose itself to the accusation that it accepted novae into the file. Still, I well understood from the pleadings that defendants argue for non-infringement because the gradient in the attacked embodiment is outside of the claimed range. It’s a borderline case, apparently: Plaintiffs allege that the gradient is 84.7° (i.e. within the claimed range), while defendants allege that the gradient is 85.6° (i.e. outside the claimed range).

Unfortunately, I had to leave at about 2:15 pm and thus don’t know whether the parties finally had settlement talks. But, frankly, I would be surprised if the parties have settled.

NOTES FROM THE HEARING