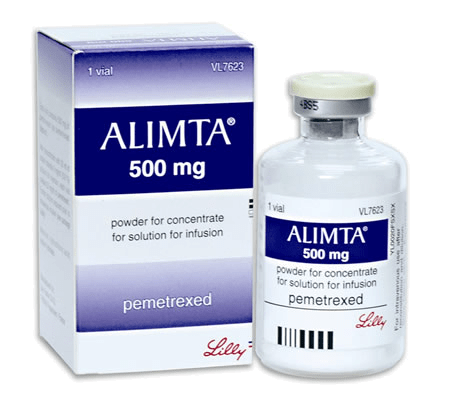 The patent in suit is Lilly‘s EP 1 313 508 B1; see the EPO Register and Swissreg for further information. The independent claims of EP’508 read as follows (emphasis added):

12.   A product containing pemetrexed disodium, vitamin B12 or a pharmaceutical derivative thereof said pharmaceutical derivative of vitamin B12 being hydroxocobalamin, cyano-10-chlorocobalamin, aquocobalamin perchlorate, aquo-10-chlorocobalamin perchlorate, azidocobalamin, chlorocobalamin or cobalamin, and, optionally, a folic binding protein binding agent selected from the group consisting of folic acid, (6R)-5-methyl-5,6,7,8-tetrahydrofolic acid and (6R)-5-formyl-5,6,7,8-tetrahydrofolic acid, or a physiologically available salt or ester thereof, as a combined preparation for the simultaneous, separate or sequential use in inhibiting tumor growth.

EP’508 had already been litigated in infringement proceedings in Switzerland, resulting in a landmark decision of the Supreme Court on the Doctrine of Equivalents and how amendments of the patent during prosecution are to be dealt with in this respect; see this Blog here.

This time, validity of EP’508 is being challenged, based on a lack of novelty or, at least, lack of an inventive step; and added matter. Only inventive step has been pleaded in the hearing. With respect to the other grounds of nullity, the Sandoz merely referred to the written submissions.

It was evident from the pleadings that the opinion of the judge-rapporteur had been in favour of the defendant. This interim opinion is in line with the decision of an EPO opposition division, the Rechtbank Den Haag (Case No. C/09/533354 / HA ZA 17-581; judgment available as Dutch original and inofficial English translation), the IP High Court of Japan and the U.S. CAFC. On the other hand, the German Federal Patent Court had revoked the German part of EP’508; an appeal before the Supreme Court is still pending.

Sandoz started from Jackman as closest prior art in the assessment of inventive step. With reference to Worzalla et al., Jackman describes experiments in which pemetrexed was administered alongside with folic acid. Further, phase I clinical trials had been reported in which pemetrexed was administered together with folic acid (Hammond et al.). In consideration of the biochemical pathways, Sandoz argued that it had been obvious to add vitamin B12 to said known combination.

Eli Lilly of course disagreed. In Lilly’s view, the skilled person would not have pursued a combination of pemetrexed and folic acid, let alone to add vitamin B12. In real life, phase II clinical trials began with pemetrexed alone, irrespective of the experiments of Hammond et al. Toxicity of pemetrexed had intially been deemed controllable. It was only in the course of phase II clinical trials that the therapy scheme was switched because toxicity was found to be too severe.

A significant point of discussion was whether a skilled person would have been motivated to add vitamin B12 in light of some marker experiments. Niyikiza, the main inventor of the patent in suit, had published a report that described a correlation of pemetrexed toxicity with an unspecific marker (homocysteine), but not with the vitamin B12-specific marker MMA (methlymalonic acid). Accordingly, in Lilly’s view, a skilled person would not have been prompted towards the invention.