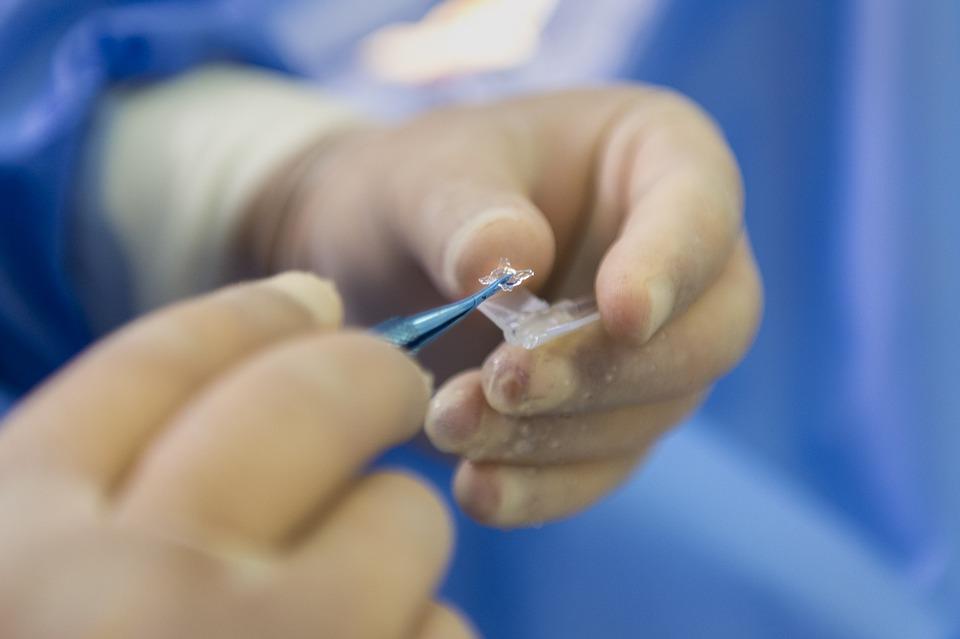 Hepp Wenger Ryffel is involved in this matter on behalf of Alcon.

HOYA had lodged nullity proceedings against Alcon re EP/CH 2 002 803 B1; see the European Register and Swissreg for further bibliographic information. Don’t be misled by the reference to EP 2 002 801 at various occasions in the decision (including the operative provisions); that’s a typo.

The invention of EP 803 relates to intraocular lenses (IOLs), more particularly to cartridges used to inject IOLs into an eye. This is reflected in claim 1 of EP 803 as granted, broken down into distinct features, as follows:

The decision holds that the combination of features 1.3.3 b), 1.4.1 and 1.3.3 c) is based on two different embodiments, and that feature 1.4.1 itself is based on an intermediate generalization; the decision further holds that this also applies to the auxiliary requests (¶ 39).

These issues of (non-)complicance with the requirements of Art. 123(2) EPC are very case-specific, and I do not believe they are of broader interest beyond the case at hand. An appeal is currently pending at the Supreme Court.

But there are quite some other aspects in the decision that I find interesting.

comments on the expert opinion

The parties had been given the chance to the comment on the judge-rapporteur’s expert opinion in writing, within a time limit fixed by the court. But what if a party does not comment in writing: Is that party prevented from pleading at the main hearing on that issue? The decision holds that this is not the case. However, the decision also holds that it contravenes the equality or arms not to submit a position in writing within the time limit set by the court, but to argue extensively on the expert opinion at the main hearing.

Even though it had no consequences in this case, it appears that unconditional withholding of comments on the expert opinion is a risky thing to do.

That’s pretty straight-forward, isn’t it? The decision refers to S2017_001 (¶ 4.4) in this respect. In that case, it had been held that the definition and knowledge of a skilled person that had been proposed by the parties appeared to be correct in view of the technical problem defined in the patent itself.

But what if a party argues for obviousness starting from a ‘closest’ prior art document that is not in the same technical field, and/or the objetive technical problem is not anymore the one that is stated in the patent? Let’s take a washing machine as an example. The invention is all about a very energy-efficient motor — in a washing machine.

Let’s further assume that such a very energy-efficient motor had been described in the prior art, but only in a publication relating to the space station ISS. Such a document cannot be ignored as a potentially promising springboard; see e.g. S2017_001, ¶ 4.6. Now, starting from that publication, the skilled person being an engineer of washing machines would immediately recognize what a perfect fit this motor is for his daily business, i.e. washing machines. The invention is just plainly obvious(?). But that can’t be it, right? Starting from a technologically pretty unrelated ‘closest’ prior art document, the skilled person cannot rightly be considered to be skilled in the field where the solution or the invention lies. Rather, I feel the skilled person should then be from the field where this ‘closest’ prior art stems from (i.e., in my example above, an aerospace engineer). And when you ask an aerospace engineer for alternative uses of the motor, he quite likely will not come up with washing machines.

It will be interesting to see a case being decided at the FPC where this issue is decisive.

In the present decision, the FPC clarified that this should be so ‘in case of doubt’.

More specifically, the decision holds that the rule of ‘literal coverage’ shall only apply when the claim can be reasonably construed in several ways. In such cases, the claim shall be construed such that the specifically disclosed embodiments are literally covered.

A much appreciated and highly relevant clarification about claim construction, in line with e.g. X ZR 35/11 (‘Zugriffsrechte’) of the German Supreme Court.