Expectedly, the ongoing legal disputes on coffee capsules have reached the FPC — and the Supreme Court. The following patents are in suit:

However, the present decision of the Supreme Court does not pertain to the merits of the case yet; it only clarifies a question of recusal of a member of the board of the FPC.

The potential appearance of bias of judges is undoubtedly a matter of an ongoing debate amongst practitioners. How comes, you ask? Well, the FPC has been set up with only two permanent judges which are supported by a pool of 36 non-permanent judges (11 with a background in law, 25 with a technical background). Most of the non-permanent judges are attorneys-at-law and patent attorneys, either in private practise or in industry. A non-permanent judge in one case may also act as representative / assisting in patent matters in other cases. Evidently, there are pros and cons of this setup: On the one hand, this makes a lot of technical and legal competence available for the FPC to recruit for a specific case. Mostly, the FPC is thus in a position to handle cases without costly and time-consuming court opinions to be obtained from external experts. On the other hand, it is an intrinsic risk that judges might need to recuse in view of a conflict of interests. Of course, it must not be forgotten that the judges have sworn an oath (or taken a vow) pertaining to fulfilling their duties conscientiously; cf. Art. 15 PatCA. Nevertheless, it was only a matter of time that case-law would figure out the boundaries.

In the present matter, the parties had already been summoned to an oral hearing when they were informed by the president that TSWpat, i.e. the firm of the non-permanent judge Peter RIGLING who was appointed reporting judge in the present matter, meanwhile represents a sister company of one of the defendants in the prosecution of a single trademark application in Switzerland. The president of the FPC had informed the parties that this did not constitute a ground of recusal in the sense of Art. 3 or 4 of the Guidelines on Independence. However, the plaintiffs requested that judge Peter RIGLING shall recuse himself or shall be recused ex officio. 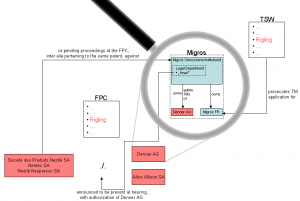 Judge Peter RIGLING outlined in writing, why — in his point of view — there was no reason for him to recuse. First, the affiliated (sister) company is not a party to the present proceedings. Moreover, the subject-matter of the present proceedings has no points of contact with the trademark prosecution handled by his firm. Finally, the trademark matter handled by his firm is not associated with significant income.

Defendants refrained from providing any comments.

Plaintiffs argued that defendant Denner belongs to the Migros group of companies, as well as the applicant of the trademark application handled by the firm of judge Peter RIGLING. Not only Denner, but also Migros sells coffee capsules which are compatible with Nespresso® machines. Consequently, the plaintiffs had sued Migros for patent infringement, too. These proceedings are also pending (no publications on this parallel case are available to date). In both cases, inter alia the interpretation and infringement of one and the same patent is at stake (EP 1 646 305 B1; cf. the EPO Patent Register and Swissreg for more details). To the extent of these similarities, the outcome of the present case will prejudice the proceedings against Migros, in the plaintiffs’ view.

Plaintiffs further argued that Migros is not only proprietor of Denner, but also handles Denner’s intellectual property matters, such as e.g. the administration of trademarks. Plaintiffs also presumed that a representative of Migros would have taken part in the oral hearing. At that time, the parties had already informed the FPC by Email about the persons attending the scheduled hearing, but the FPC did not share this information with the respective other parties.

The FPC relied on Art. 28 PatCA (considering it as lex specialis to Art. 47 CPC). According to this provision, a judge has to recuse in proceedings where a member of the judge’s law firm or patent law firm or employer represents one of the parties. This is not the case here, since Migros France is not a party to the present proceedings.  With reference to Art. 47 CPC, the FPC held that there are no special circumstances that might point to a potential bias of the objected judge. The whole setup of the FPC hinges on the assumption that the non-permanent judges are not led by considerations like those brought forward by the plaintiff; there is thus no room left for speculations in this respect.

The FPC thus dismissed the plaintiffs’ request for recusal of judge Peter RIGLING.

4.  Decision of the Supreme Court

First, the Supreme Court emphasizes that any person whose case falls to be judicially decided has the right to have the case heard by a legally constituted, competent, independent and impartial court (Art. 30(1) Federal Constitution of the Swiss Confederation). This constitutional guarantee cannot justify a differentiation between permanent and non-permanent judges involved (r. 2.1.3).

The situation can get (and got here!) even more complicated when connected undertakings are involved. The Supreme Court explicitly holds that a schematic approach in the assessment of an appearance of bias is not applicable in such cases (r. 2.1.6).

In this respect, it is irrelevant whether such assessment is cumbersome or not.

Moreover, the Supreme Court holds that Art. 28 PatCA is not a lex specialis to the CPC in a general sense. Art. 28 PatCA explicitly deals with the situation where a member of the judge’s law firm or patent law firm or employer represents one of the parties. This was not the case here. There is no room for an argumentum e contrario based on Art. 28 PatCA, i.e. that only the specific situation governed by Art. 28 PatCA might constitute a reason of recusal; cf. r. 2.2.

Finally, the Supreme Court states that the plaintiff had the right to consult the case files and to obtain copies thereof; cf. Art. 53(2) CPC. This also pertains to the Email communication prior to the scheduled hearing (cf. Section 2, above). Apparently, there is no conflict with overriding public or private interests. In the said Email, the head of the legal department of the Migros-Genossenschafts-Bund (MGB) was announced to be present at the hearing, with authorization of Denner AG. The Supreme Court thus holds that it was evident for the judges that Migros has an immediate interest in the outcome of the present proceedings. Consequently, it cannot be decisive whether Migros itself is formally party to the proceedings or not.

Full text of the decision of the Supreme Court right here: