1.  Background of the case

The main hearing in this matter took place on September 17, 2013; see the detailed report in an earlier post.

Later-on, the patent-in-suit was subject to centralized limitation proceedings at the EPO in accordance with Art. 105a EPC and was re-published as EP 1 508 436 B3.

Self-adhesive tape for closing, sealing and adhering joints, more especially for use in house-building, and more especially joints in corners and edges, said tape having a carrier layer (1) on its upper side, an adhesive coating (2) of the carrier layer (1) on its underside and a removable covering film (3) on its underside, characterised in that at least a first fold portion (4) of the tape is folded-over in the transverse direction along a first folding edge (5) extending in the longitudinal direction of the tape, and in that at least one part of the adhesive coating (2) along a longitudinal portion of the tape is not covered with the covering film (3).

Embodiments of such a tape are illustrated inter alia as follows in the patent in suit (annotation added; click image to enlarge). The portions (4) and (6) can be folded outwards, i.e. upper and lower parts of the carrier layer (1) are not adhesively connected: 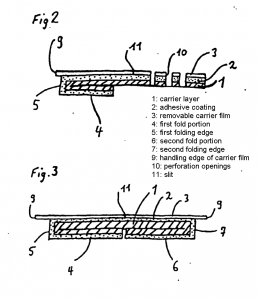 Patentee / defendant left the independent claim untouched in centralized limitation proceedings with the EPO. Rather, only dependent claim 16 and a corresponding part of the description was deleted; cf. EP 1 508 436 B1 with tracked changes. This deleted dependent claim related to embodiments wherein the adhesive coating (2) has a non-adhesive central strip.

Patentee / defendant argued that the person of routine skill in the art would understand claim 1 now such that the adhesive coating is devoid of a non-adhesive central strip, in order to distinguish the claimed invention from the prior art, namely document D3 (JP 8 311417 A) already cited in the search report. See Fig. 2 of D3 below (annotations added; click to enlarge): 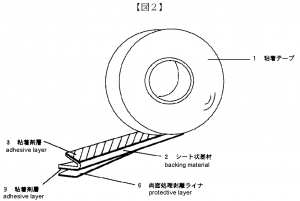 In auxiliary requests, the absence of a non-adhesive central strip was even literally recited in claim 1; see below.

Patentee / defendant requested maintenance of the patent as follows.

Claim 1 of EP 1 508 436 B3, but further limited by the intended purpose for use in house building and the feature that the tape is rolled-up to form a roll of adhesive tape (click to enlarge):

Similar to (1.), but reformulated as a use claim (click to enlarge):

Similar to MR, but with a further negative feature (let’s call it a disclaimer) clarifying that the adhesive coating (2) has no non-adhesive central strip (click to enlarge):

Similar to AR1, but again with the disclaimer clarifying that the adhesive coating (2) has no non-adhesive central strip (click to enlarge): 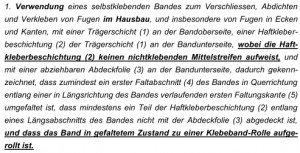 3.  The decision of the FPC

Legal interest in the nullity action

The defendant had been served with a warning letter by the plaintiff. However, the warning letter was based on EP 1 508 648 B1, i.e. not the patent-in-suit here. The patentee thus put the legal interest of the defendant in dispute. The FPC clearly held that the — undisputed — competitive relationship between the parties is sufficient to establish a legal interest; see BGE 116 II 196, r. 2.

Differences between CH-PatA and EPC re limitation

This case highlights a potential pitfall in the interplay of centralised EPO limitation and yet further national limitation of the European patent in Switzerland.

In brief, this is how the FPC correlated the provisions of the PatA and the EPC:

Beyond the requirements under the EPC, limitation in Switzerland thus requires that the limited claim defines an embodiment that is included in the specification of the published patent. In particular, the FPC referred to BGE 95 II 364 (r. 4f) in this respect. This additional requirement under the PatA was decisive for AR2 and AR3, see below.

Patentee argued that the person of routine skill in the art would understand the (limited) patent in a sense that the adhesive layer uninterruptedly covers the underside of the tape. The FPC was not convinced. In fact, there are even embodiments in the patent in suit that are perforated through the adhesive layer (see figures above). Thus, D3 was held to be novelty-destroying for both MR and AR1.

4.  Personal remarks on “limitation of the patent”

Beyond the peculiarities of Swiss limitation requirements discussed above, yet another aspect of the present case is somewhat noteworthy (even though not decisive here): Was the patent indeed “limited by an amendment of the claims” in centralised EPO limitation proceedings, as Art. 105a(1) EPC requires?

As outlined above, independent claim 1 was not amended at all; only a dependent claim (i.e. the optional presence of an additional feature) and the corresponding part of the description was deleted. Can this result in a limitation of the scope of the patent? Generally speaking, I would say “no”. I did not conduct an in-depth literature and case law review, but evidently there is some support for this point of view, e.g.:

According to the EPO, a limitation must reduce the scope of protection of an independent claim by adding a feature. Dependent claims, description and drawings may only be amended in accordance with amendments of the independent claims.
(D. Visser, The annotated European patent convention, Nov. 2012, #1 to R. 95(2) EPC)

This being said, I was quite surprised to see what the EPO Guidelines for Examination (D-X 4.3) say:

Thus, limitation in the present case was apparently in conformance with the Guidelines. But, again: Can this be a limitation?

Giving this a second thought, there may well be situations where deletion of a dependent claim reduces the scope of the patent. Assume a patent with the following claims:

The description contains the following paragraphs:

[0001] As understood herein, the term “steel” also encompasses the raw materials used in the manufacture of steel, such as e.g. iron.

Evidently, claims 3 and 4 and the corresponding definitions given in para. [0001] and [0002] are contrary to the common understanding of a person of skill in the art of the terms “steel” and “screw”. And, of course, an application like this should not pass examination without an objection under Art. 84 EPC; see EPO Guidelines for Examination (F-IV 4.2). But once the patent is granted as such, definitions stand as they are. That means that — by unconventional definition — the scope of the claim is broader than the mere wording of claim 1 would suggest at first sight. If such an unconventional definition is deleted later on in limitation proceedings (in the claims and the description), it is again the common understanding of the person of skill in the art that counts (thus, steel is not iron anymore, and a nail is no longer a screw). I can only think of situations like these where deletion of a dependent claim reduces the scope of the patent. But in a perfect world, such claim sets should not be granted but rather be objected under Art. 84 EPC. Assuming that the Guidelines are not referring to cases that should not even have passed to grant if the examiner had acted in accordance with the Guidelines during prosecution, I am puzzled about the rationale behind this instruction to the examiners. In my perception this is plain wrong.