The patent in suit (Swiss patent CH 683 963 A5; cf. Fig. 4 below for illustrative purposes) pertains to an implant which serves for the stiff connection of vertebrae of the spinal column: 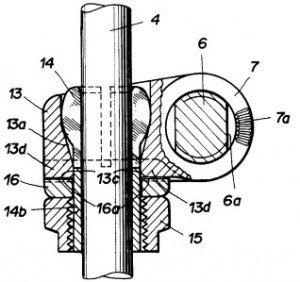 The application was filed in 1988 by the defendant. In addition to Mr. Robert Mathys (jun.), Prof. Dr. Max Aebi was identified as an inventor. Mr. Aebi had assigned his rights to the invention to the defendant. In 2006, the plaintiff sued the patentee with the Cantonal High Court of Grisons, arguing that the patent was obtained in bad faith, since the defendant should have known that Mr. Aebi was not entitled to assign his rights to the invention. The plaintiff inter alia requested the assignment of a share of 50% of the patent, and as an auxiliary request that the patent be revoked.

Mr. Aebi was an employee of the plaintiff under public law when the invention was made,. At that time, the University of Berne was not yet a legal entity, but only an administrative unit of the department of education of the Canton of Berne. The FPC held that the University of Berne had no right of action: It was not proven that when it finally became a legal entity in 1996, any rights to the invention under dispute were in fact transferred to the University. The claim was dismissed already for this reason.

Inventions made by professors at Universities were not regulated by law in the Canton of Berne at the filing date of the patent in suit. In contrast, it was the prevailing opinion at that time in Switzerland that inventions made by professors of Universities did not qualify as employee inventions under Art. 332 of the Swiss Code of Obligations. In consequence, the FPC held that there was no legal basis of the plaintiff’s claim that Mr. Aebi’s invention was an employee’s invention belonging to the University.

In addition, there was no evidence that the defendant should have had any doubt about Mr. Aebi’s entitlement to assign his share in the invention. To the contrary, there were indications that the University of Berne was not interested in patents at all at the time when the patent in suit was filed. In consequence, it was not proven that the patent owner acted in bad faith; any assignment action thus had to be filed within two years after grant (Art. 31 para. 1 of the Federal Act on Invention Patents). The right in the assignment action was forfeited.

In the meantime, the decision has become final.

One Reply to “Claim dismissed for lack of right of action”