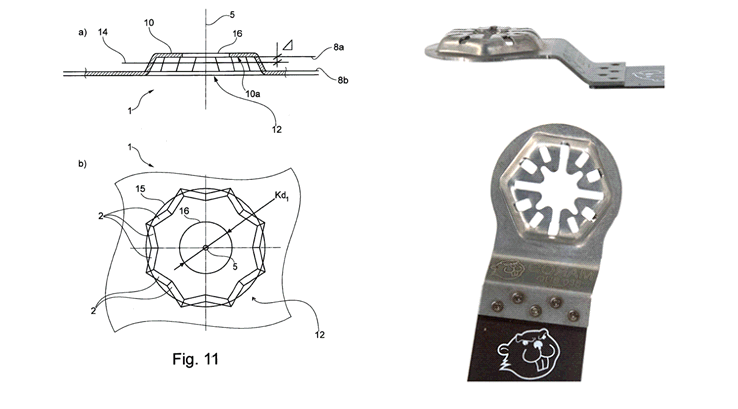 The patent at stake is EP 3 027 362 B1 which is jointly owned by C&E Fein GmbH and Robert Bosch GmbH; see the EPO Register and Swissreg for further information. The invention is about a tool which is intended to be used with a machine tool, in particular a hand guided machine tool. The machine tool has a rotational drive, e.g. an oscillating drive. Examples include a drill, a grinding disc, a cutting disc or a circular saw. If you are interested in such detailed information, you will easily get the gist of the invention from e.g. Fig. 11 of EP’362 (see header picture) when reading the main claim of the patent.

and which has an attachment device (12) by means of which it can be fastened to a machine tool (22) in such a manner that the driving axis and a tool axis of rotation (5) are substantially coincident,

wherein, for receiving a driving force, the attachment device (12) comprises at least two driving area regions (2, 2a, 2b) each having a plurality of surface points (3) and which are spaced from this tool axis of rotation (5),

characterized in that tangent planes (4) at these surface points (3) are inclined relative to an axial plane (7), which includes the tool axis of rotation (5),

wherein the tangent planes (4) are inclined relative to a radial plane (6), which extends perpendicular to the tool axis of rotation (5),

wherein the attachment device (12) comprises a side wall,

wherein the side wall extends spaced radially from the tool axis of rotation (5),

wherein the side wall comprises the driving area regions (2, 2a, 2b),

The invention aims at providing a tool device in such a manner that the torque which is effectuated by the driving device of the machine is reliably transferred to the tool device. This is achieved by an attachment device (12) which comprises side walls that comprise driving area regions (2). Those driving areas (2) are spaced apart from the tool axis and inclined with respect to the axial plane. It is the function of the driving areas to receive a driving force.

The plaintiffs asserted that EP’362 is infringed by defendant’s saw blades ‘B-Cut’ with ‘Quick Fixture’, and requested interim injunctive relief. Indeed, at least at first sight there are quite some similarities between Coram’s saw blades with ‘Quick Fixture’ (header image, right hand side) and the figures of the allegedly infringed patent (header image, left hand side). But the question of whether or not the allegedly infringing devices actually read on the claim was not an issue in the hearing. Likewise, it was only a sideshow in the hearing whether the matter was urgent, and whether the alleged violation threatened to cause not easily reparable harm to the plaintiffs (Art. 261(1) lit. b CPC).

However, the defendant argued for nullity as a plea in defense, i.e. asserted a lack of novelty over EP 0 596 831 A1 and DE 2 120 669. The defendant construed EP’362 broadly and, thus, found the claimed subject-matter more readily anticipated in the prior art than the plaintiffs — and apparently also more readily than the judge-rapporteur. Specifically, the defendant argued that a ‘side-wall’ not necessarily implies a 3D-structure but is anticipated already by a 2D-surface (as disclosed in Fig. 4 of EP'831). With regard to DE'669, the defendant argued that a feature having a certain function (‘driving area […] for receiving a driving force’) is anticipated by a feature which might not exclusively have that function but nevertheless supports it (‘carrier with an projecting attachment’ as shown in Figs. 5 and 6 of DE'669).

In order to support views on correct claims construction from a Swiss perspective, O2013_008 (‘Sprühpistole’) was cited repeatedly by the parties. Unless the case was settled by agreement after the public part of the hearing, we might gain more insight on this issue soon.

The defendant further argued that the request for interim injunctive relief was overly broad and covered embodiments of the prior art.

Both representatives requested reimbursement of the necessary expenses for the assisting patent attorney in the same amount as are costs for legal representation according to the tariff (~kCHF 25 each).

On the procedural side, it was good to see that the projector / screen infrastructure was used again by at least one party and the court (connection of Windows® devices apparently is unproblematic). Further 8562532553 who call , plaintiffs’ counsel inquired whether the court wishes to be provided with pleading notes or not (see this Blog here for my very personal view, and the results of a little survey). Obviously, some judges appreciate written pleading notes; and some judges don’t. From a personal note of the president, however, it could be inferred that he liked pleadings in free speech. So, now we know!

2 Replies to “Anything but a quick fix: Coram beavering away at knocking out a patent”