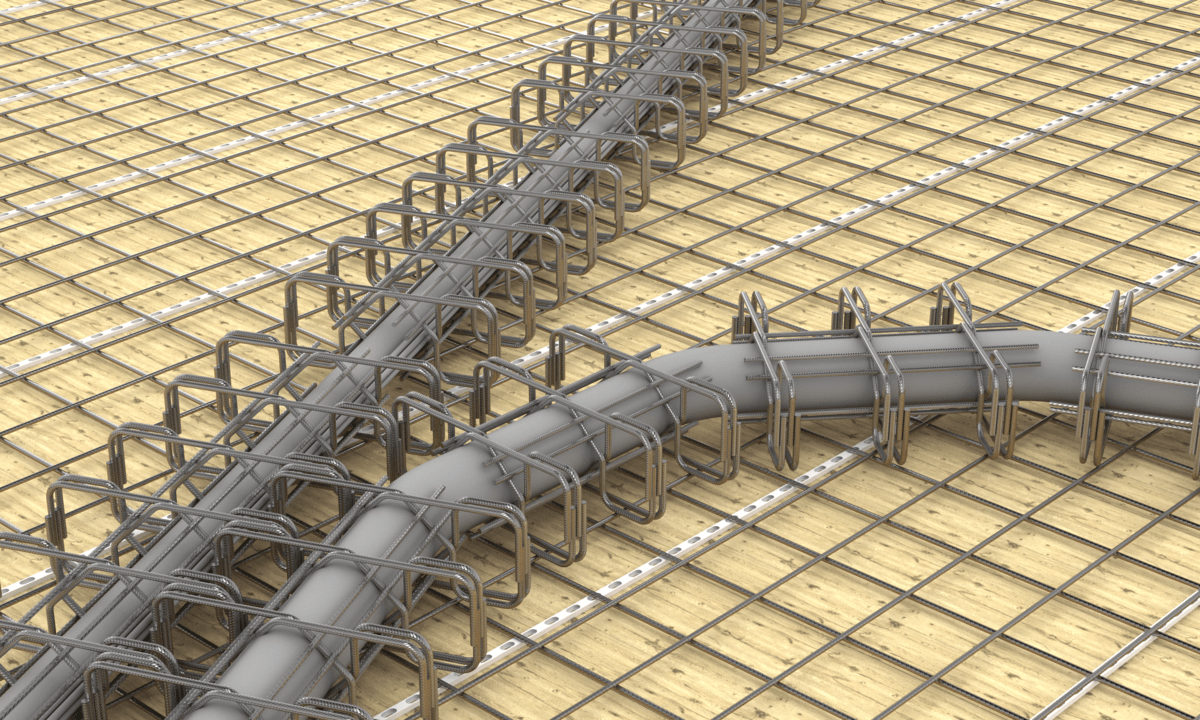 F.J. Aschwanden on the one hand, and acG Holding and Andreas (André) Robert on the other hand are litigating over the validity of EP 2 475 827 in Switzerland.

From the earlier case S2018_005, it is known that Basys is the exclusive licensee of EP 827; Aschwanden’s ‘Dura Box‘ line of products (illustrated in the header image) had been asserted to infringe EP 827.

EP 827 pertains to reinforcing elements that can be integrated in concrete walls in order to support recesses for conduits (water, electricity, etc.). Opposition proceedings are currently pending at the EPO, and the parties have been summoned for oral proceedings on 31 March 2020. One of the two opponents is F.J. Aschwanden, i.e. the plaintiff in the present case. The second opponent is Jordahl H-Bau AG.

Noteworthy, the patentees have submitted two auxiliary requests in the EPO opposition proceedings on 16 January 2019, and for the second auxiliary request (AR2) the OD provisionally acknowledged at least novelty over the cited prior art in the interim assessment attached to the summons of 26 June 2019.

The hearing started with a somewhat odd interaction. As is customary, the people present for both parties were introduced by their respective lawyers. Mr Maier was referred to as their ‘patent representative’ (‘Patentvertreter’). The President raised his eyebrows and interjected with the question of whether Mr Maier was an admitted representative (‘zugelassener Vertreter’). Apparently, some phrasing in the briefs may have been understood as if Mr Maier identified himself as a patent attorney. Mr Maier immediately responded that this was a mistake, and that he was indeed not a patent attorney (‘Ja, das ist nicht ganz korrekt …’).

The hearing continued with a more substantial blow to defendant’s case. The President informed the parties that defendant’s further auxiliary requests (corresponding to the two auxiliary requests from the co-pending EPO proceedings) would not be admitted into the proceedings. Those requests could well have been submitted already with the rejoinder, but the defendants failed to do so. As a consequence, the court did not admit them into the proceedings; Art. 292 CPC. Note that the second auxiliary request (AR2) was the only one that was provisionally considered to be new over the cited prior art by the OD in the summons, and the judge-rapporteur’s expert opinion on the claim sets submitted before the closure of the file has apparently been rather negative for the patentee, in our perception of what has been discussed at the hearing.

Even though the further auxiliary requests had not been admitted into the proceedings, a substantial part of the pleadings was about the merits of those requests.

Interestingly, defendants requested to delay a judgment until after the EPO’s OD will have decided in the co-pending opposition proceedings. Defendants’ argument seemed premised on the expectation that the opposition division would maintain EP 872 in accordance with AR2. In that case (and, of course, when no appeal is lodged, or if the decision is affirmed by the Boards of Appeal), AR2 would become ex tunc the relevant claim set of EP 872.

As mentioned, AR2 was not admitted into the Swiss proceeding. Thus, so defendants, a conflicting judgment may be the result if the FPC found EP 872 invalid as the decision would be based on a claim set that had formally never been granted. Note that defendants only asked for the judgment to be delayed, but not for the proceedings to be suspended. Apparently, the latter had already been requested in the past but denied by the court.

As always, the President asked the parties whether they were interested in settlement discussions. Both parties indicated that they would be very interested in a licensing agreement. However, the plaintiff stated that he was absolutely not going to pay for such a license, while defendants said that they would absolutely not give away a license for free. The President asked if they would at least listen to a proposal by the court, to which both parties responded affirmatively before the session closed.